Dubrovnik began as a Roman settlement. From the Middle Ages on it was a prize sought by Venice, Hungary, Turkey, and others who recognized the city’s value as a maritime port. In the 14th century, by the force of skilled diplomacy, Dubrovnik became a city-state which flourished for four centuries under the name of Republic of Ragusa. Today, inside protective walls the pedestrian-only Old Town is bustling with an international crowd. 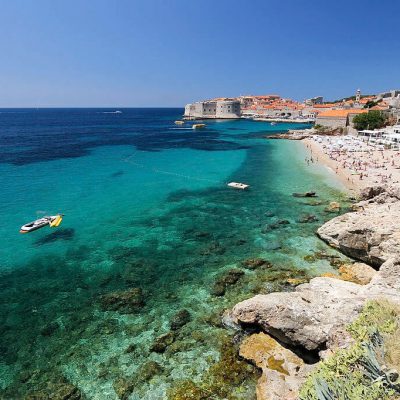 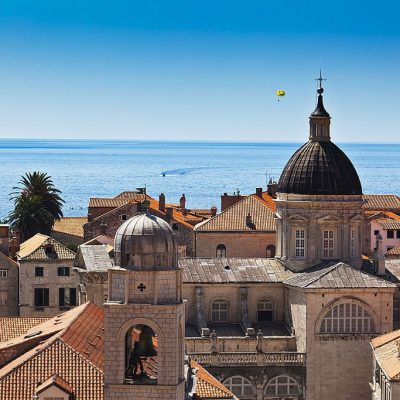 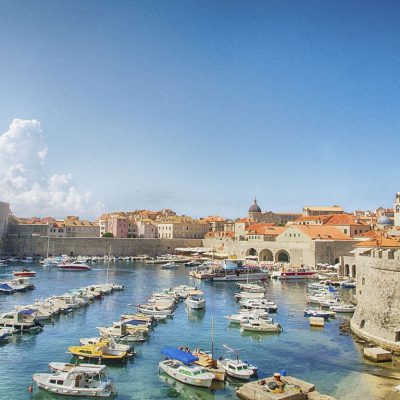 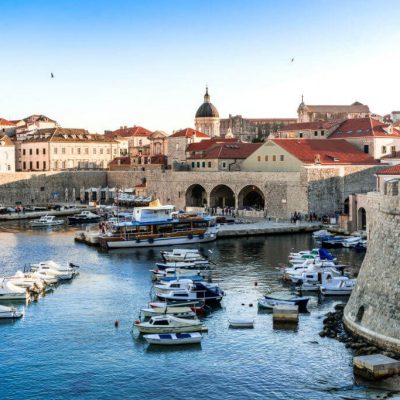 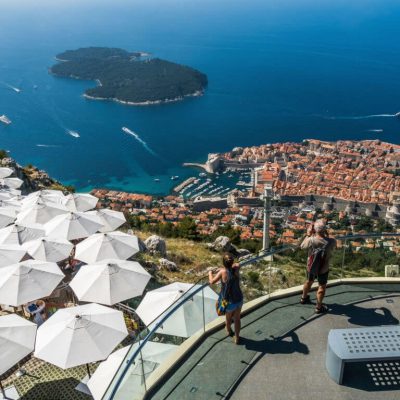 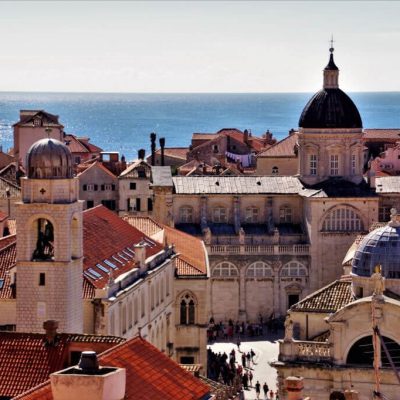 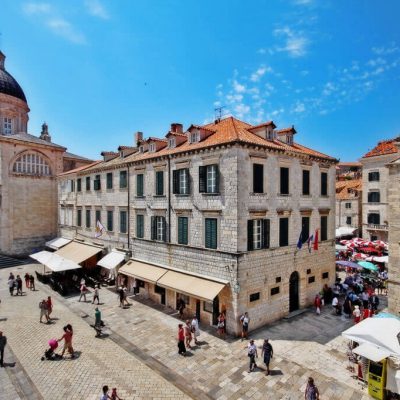 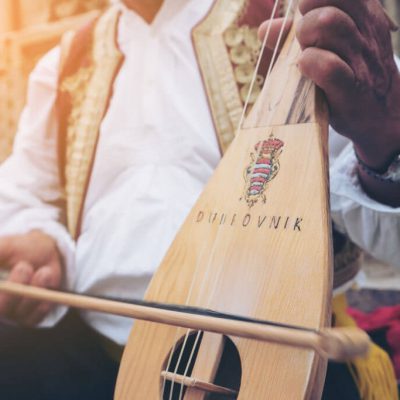 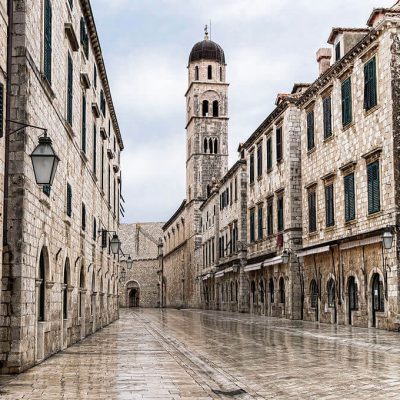 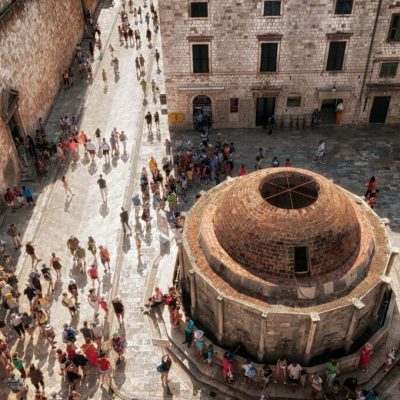 Dubrovnik began as a Roman settlement. From the Middle Ages on it was a prize sought by Venice, Hungary, Turkey, and others who recognized the city’s value as a maritime port. In the 14th century, by the force of skilled diplomacy, Dubrovnik became a city-state which flourished for four centuries under the name of Republic of Ragusa. Today, inside protective walls the pedestrian-only Old Town is bustling with an international crowd. Here you will find almost all the area’s sights worth seeing—historic churches and public buildings; designer shops and fancy restaurants; ancient sculptures and modern galleries; fountains and bell towers; monasteries and gardens; and the ancient city wall itself.

Outside the Old Town walls, Dubrovnik’s suburban districts are packed with hotels, restaurants, parks, and camp-grounds, all focused on the hordes of tourists clamoring to bask in the city’s Mediterranean magic. Even the authors of the American TV series “Game of Thrones” recognized the beauty of Dubrovnik and filmed the 2nd and 3rd seasons in the city.

The main post office is at Pile – Dr. Ante Starcevica 2.

Croatia’s major banks operate ATMs around Dubrovnik – you can find them at the Stradun, Lapad, outside the Pile Gate, in Gruž, and even in hotel lobbies and restaurants. Most banks are open from 7:30 AM to 7 PM Monday through Friday and from 7:30 to 11:30 AM on Saturdays. Credit cards are generally accepted at hotels, larger restaurants and supermarkets.

The easiest way to reach Dubrovnik is by plane. Dubrovnik International Airport is located 18 km from the city center. There are regular shuttle buses coordinated with incoming flights that can take you to the city in about 25 minutes.

There are two harbours in Dubrovnik – the old harbour next to the walls of the Old Town and the new, commercial port at Gruž. Jadrolinija ferry office is at Gruž, and ferry routes to and from Dubrovnik stop at various Dalmatian islands.

There is no train service to Dubrovnik. Daily buses operate between the Dubrovnik ferry port at Gruž and Zagreb, Zadar, Split, Šibenik, Rijeka, Orebić, and Korčula in Croatia, as well as Mostar and Sarajevo in Bosnia and Međugorje in Hercegovina.

The wall is Dubrovnik’s main attraction, and no visit to the area is complete without at least a partial walk around the top of the 25m high and 6m thick medieval fortification. You can access the wall at three points: just inside the Pile Gate, near the Maritime Museum/St. John’s Fortress, and near the Dominican Monastery at the Ploče Gate. If you want to do the entire 360-degree stroll, continue straight up toward the Minčeta Tower, recognizable by its distinctive “crown.” If you decide on the partial walk, halfway up the stairs you’ll have to do a 180 from the stairs via a small landing to reach the wall, and you’ll end your walk near St. John’s Fortress on the south side. The 16th century Revelin Fort is on the eastern side of the wall above the Ploče Gate; and the 15th-century Bokar Fortress, which guarded against sea incursions, is at the southwestern corner across from the Lovrijenac Fortress.

This monastery was positioned against the city wall to strengthen the ramparts’ northeastern flank. An impressive stairway leads to the church doorway, which is decorated with a statue of St. Dominic; the door opens to the 15th-century Gothic cloister designed by Maso di Bartolomeo. The monastery’s rooms circle the cloister, whose graceful triple arches frame a garden with Mediterranean plantings; and an ancient well lies in the center. The museum holds paintings, triptychs, church vessels, and a reliquary purportedly containing the skull of King Stephen I of Hungary.

The small apothecary inside the 14th-century monastery complex has been in business in 1317 and claims to be the oldest working pharmacy in Europe (it still sells herbal lotions and tonic made according to ancient recipes). It has a fascinating display of ancient lab equipment, mortars, measuring implements, and decorative containers used over the centuries. The lower cloister’s open wall of double columns (topped with human, animal, and plant carvings) frame a tranquil open garden area where you can imagine monks enjoying the contemplative life. The complex also is home to a 15th-century well, the single-nave St. Francis Church, a bell tower, and the monastery museum, whose library contains ancient writings, music manuscripts, and more.

When you enter Old Town through either the Pile or Ploče Gate at either end of the Stradun, the first thing you will see is one of two Onofrio fountains. Construction on both started in 1438, and they  were designed by Italian hydroengineer Onofrio della Cava and architect Pietro di Martino. Fountains provide clean, cold water via an aqueduct from the Dubrovnik River (Rijeka Dubrovačka), 11km away. The larger fountain at the Pile Gate delivers cold water from 16 carved stone heads that ring the structure’s lower third. Water from the Luža Square fountain flows through a more ornate device with detailed sculpture work.

This sculpture is chiseled into a stone column in the center of Luža Square. It was erected in 1419 and once served as the city’s forum for public proclamations, notices, rallies, and punishments. In 1990 a flag with the Libertas motto was flown above the column, and it became a rallying point for Dubrovnik’s freedom fighters. Today the Libertas banner is flown above the column to herald Dubrovnik’s annual summer festival.

In Renaissance times, a wooden drawbridge leading to this gate on the western end of the Old City was pulled up at night in an elaborate ceremony. A stone bridge leads to the outer gate, which is embellished with a statue of St. Blaise, the city’s patron saint. The outer Pile Gate was guarded from 1537 on to monitor trade in and out of the city. The interior gate was built in the 15th century and it, too, has a statue of the ubiquitous St. Blaise—this one by 20th-century Croatian sculptor Ivan Meštrović. This is Old Town’s busiest port of entry, largely because buses from the city and ferry terminals deposit their passengers there.

The original palace was rebuilt in a Venetian-Gothic style based on a design by architect Onofrio della Cava. Functionally, the Rector’s Palace was Ragusa’s governmental nerve center and housed state offices as well as a dungeon and quarters for the rector, who was required to live in the palace for the duration of his term. Today, the palace’s upstairs rooms house the City Museum (Gradski Muzej), filled with exhibits depicting how people lived in Ragusa. Classical music concerts are held in the courtyard during Summer Festival.

As you approach Luža Square from the Stradun, you’ll see the arches of the 15th-century Sponza Palace on your left. Today the palace courtyard is a bright venue for art exhibits and concerts. There are several rooms off the courtyard. Two of the rooms hold artifacts significant to Dubrovnik. One contains copies of documents that chronicle Dubrovnik’s history. The other is called the Memorial Room of the Defenders of Dubrovnik; it contains photos and biographies of the Croatian patriots who died during the 1991–92 siege of Dubrovnik and a small souvenir shop.

Stradun is the unofficial name for Placa, Dubrovnik’s main street. The historic street runs from the Pile Gate through the city directly to the Ploče Gate and once was a marshy dividing line between Ragusa and Dubrava on the mainland. Today the street is lined with neat, uniform buildings housing shops, restaurants, and entryways radiating to the alley-size side streets.

A 28-hectare (70-acre), 15th-century villa and garden estate overlooking the sea, Trsteno is situated 13km northwest of Dubrovnik. Trsteno’s botanic collection (the Arboretum) was acquired over the course of 5 centuries. In 1991, the Arboretum was severely damaged by fires set by the Serbian Army, and in 2000 by a forest fire during a drought, but it has been restored and is now a national historic site protected and maintained by the government. There’s a statue of Neptune which overlooks a goldfish pond and a fountain deep in the gardens.

Lokrum is the island closest to Dubrovnik and can be reached by water taxis which leave from the old harbor every 30 minutes daily in summer from 9am to 6pm. The journey takes about 15 minutes and costs 35kn round-trip. You can explore the woods and the vestiges of an 11th-century Benedictine monastery purchased in 1859 by Hapsburg Archduke Maximillian Ferdinand and his wife, Charlotte, as a vacation home. There’s also a walking path to Fort Royal, a French fortification built on Lokrum’s highest hill in 1806.

The museum is named after the pits which were hewn out of living rock in this granary, which was used for drying and storing imported grain for the city’s people. Built in 1590, this is a fascinating building in itself, and the exhibits showcase the economic, cultural and spiritual development of Dubrovnik.

This infamous location is known to the locals as a place where many people committed suicide. However, it’s increasingly becoming popular as a tourist attraction. The fence, which guards passing pedestrians against unfortunate demise, is now populated by padlocks left there by couples to commemorate their love for each other. The view from here, and from the nearby benches, is spectacular, and it’s only a ten minutes’ walk from the Pile Gate of the Old City.

Just past the Ploče gates is a row of adjoining stone buildings with gates guarding the courtyards. This was the Dubrovnik lazaret – quarantine houses for travellers in times of plague. Since these buildings were usually destroyed when the need for them passed, Dubrovnik’s lazaret is one of the last remaining in Europe. The rather impressive stone buildings now house artists’ workshops and a humanitarian organisation, and are the venue for concerts and DJ parties.

Guests looking for a taste of action can go hiking and horse riding in the Konavle countryside, as well as big game fishing and diving in the waters around Dubrovnik.

Restaurants in Dubrovnik offer everything – from Mediterranean dishes and Mexican food to sushi and Bosnian baklava. Local delicacies include oysters, roast duck breast, stewed frogfish with, breaded frogs’ legs and risotto with mushrooms.

Well-known wines originating from the regions of Dubrovnik and Konavle include Plavac, Dingač and Postup (red wines), Pošip (white wine) and Dubrovnik Malvasia.