Gorski kotar is the mountainous region in Croatia between Karlovac and Rijeka; a favorite region of all who like to spend an active holiday and enjoy the beautiful, preserved nature. The neigbouring region of Lika lies roughly between the Velebit mountain (southwest) and the Plješevica mountain (northeast), stretching all the way from Mala Kapela to Gračac.

Cities in Lika and Gorski Kotar: 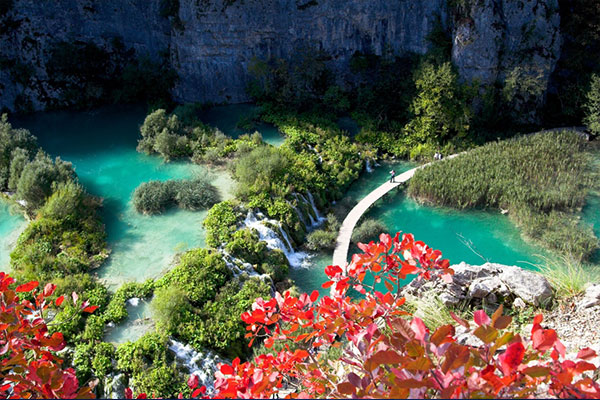 Gorski kotar is the mountainous region in Croatia between Karlovac and Rijeka; a favorite region of all who like to spend an active holiday and enjoy the beautiful, preserved nature. Because 63% of its surface is forested, Gorski kotar is also known as “the green lungs of Croatia”. The climate in Gorski Kotar is continental with short, cool summers and long, cold winters with plenty of snow. Three mountain ranges in this area – Obruč, Snježnik and Risnjak in the north, Tuhobić, Medviđak, Kobiljak towards Kvarner, and Velika Kapela, Burni Bitoraj, Viševnica, Bjelolasica, Bijele i Samarske stijene and Klek in the south – make this area perfect for hiking and mountaineering in the summer, or skiing in the winter. The Croatian Olympic Center on Mountain Bjelolasica offers accommodation and all sorts of sports activities. There are rich hunting areas and several biking trails, the most challenging one being 45 km long, from Novi Vinodolski to Begovo Razdolje, the highest town in Croatia (at 1076 m). Adventurous guests can go rafting on the river Kupa while others visit Risnjak National Park, which is also in Gorski kotar.

The neigbouring region of Lika lies roughly between the Velebit mountain (southwest) and the Plješevica mountain (northeast), stretching all the way from Mala Kapela to Gračac. Shielded by the mountains, the fertile fields of Lika, Gacka and Krbava provide agricultural support to the towns of Dalmatia. Much like Gorski kotar, Lika is a paradise for an active vacation. Whether you want to hike, mountaineer, free climb, bike, go rafting or just walk around and explore the beautiful Plitvice Lakes National Park, you are sure to forget about stress and find peace in Lika.

Kamačnik is the picturesque canyon of the eponymous river in a wooded mountain massif of Velika Kapela. The river flows into Dobra after 3 km and creates a narrow, rocky passage at its mouth. A road runs through a canyon with several bridges and galleries and it is suitable for a pleasant one-hour walk.

Lake Lokvarsko is an artificial lake created in 1954 when a dam was built. The lake is perfect for swimming, long walks and especially fishing, since some of the largest trout in the world were caught there. There is a restaurant on the shore where you can try excellent local specialities: frog legs, stuffed trout and venison.

The Lokvarska cave was discovered in 1912 and is one of the largest caves in Croatia suitable for tourist visits. It’s very refreshing in the summer since the constant temperature inside is from 6.5 to 8 °C. A guided tour takes 45 minutes, the minimum number of participants is 5, and the children visiting the cave must be older than 4 years.

The forest-park Golubinjak is strewn with numerous hiking trails, and inside it you will find giant fir trees older than 250 years. At the entrance there is a restaurant where you can take a break after a long walk, and right behind there’s a multi-purpose sports court.

The Museum of frogs in Lokve holds more than 1,000 exhibits of frogs from around the world. Here you can taste the “frog’s blood,” a natural liqueur made of berries. Frogs are very important in this region and a number of events is associated with them; namely, Frog Week from April 30 May 3, Frog Games (May 1) and Frog Night (May 2).

Bitoraj (1,386 m) and Viševica (1,428 m) belong to the same mountain range and the distance between them is only 4 km. Viševica has a conical top, and Bitoraj is a group of torn rocks protruding above the forest. Bitoraj is often called Burni Bitoraj because of the frequent strong wind (bura) that blows there.

Zeleni vir (Green Whirlpool; 345 m) is a powerful spring at the bottom of a shallow cave, below a 70-meters-high colorful series of layered rocks over which a stream crashes like a white curtain. Its waters pass through an underwater channel to a hydroelectric facility (built in 1921) situated about 100 m downstream. Zeleni vir is named after the green water of the pond which is formed within the cave.

Vražji prolaz (Devil’s Pass) is a 800 meters long canyon which many consider one of the most beautiful places in Croatia. A mountain stream Jasle flows through a narrow gorge about 2 meters wide, between rocks 100 m high. Above the stream there are metal rails cut into the rock, creating â€‹â€‹bridges and stairs that you can walk on. Devil’s Pass was also called Devil’s Precipice, and the poets likened it to Dante’s journey into hell.

Klek (1181 m) is a mountain to which many legends and tales are related, and it’s an interesting destination for both children and adults. Rocks on top of the mountain resemble a sleeping giant, and an old legend says that during stormy nights fairies and elves gather on top of Klek, and witches dance and sing around it at midnight.

The area of Samarske stijene (Samarske Rocks) is one of the most beautiful hiking destinations in Croatia. Together with Bijele stijene (White Rocks) they form a strict nature reserve where all human intervention is prohibited. Climbing the Bijele stijene is one of Croatia’s most attractive hiking trips, because here the nature has created an astonishing gallery of karst formations. Famous “fingers” (narrow pointed rocks) are one of Croatia’s most recognizable mountain motifs. The shortest climb to Bijele stijene begins from a forest road, so-called Begova staza (Bey’s path), and takes about 1 h.

As the highest mountain of Gorski Kotar in the Kapela mountain range (1534 m), Bjelolasica is named after a narrow ridge of white stones that stands out above the forest belt, especially when covered in snow. Bjelolasica is 7 km long with very steep slopes, full of large and dense forests streaked with cliffs and meadows. In winter, the mountain is a perfect ski destination because it’s covered with snow until mid-spring, when a lush flora starts blooming. Despite the steep slopes, the ridge of the mountain is a mountain road connecting the top of Bjelolasica with the ski slopes of Croatian Olympic Centre. The area is dominated by the Olympic Centre, which is located at an altitude of 620 m and offers accommodation and various activities. In the warmer months, a football field with an athletic track, jogging track and gym are available. The ski resort is located only a few hundred meters from the Olympic Center.

Snježnik (1506 m) is a 10 km long stone ridge from which steep meadows full of flowers descend. It provides one of the most beautiful vistas in Croatia: you can see Paklenica, Obruč, Učka and the Kvarner islands, and even Snežnik in Slovenia. Apart from the view, you can enjoy the exceptionally rich flora, especially the rare edelweiss.

Risnjak National Park
The main part of the National Park consists of the Risnjak mountain range (1528 m), and the mountain top of Snježnik (1506 m). The park also contains the source of the Kupa river. Worth the visit is a quiet and picturesque valley of Leske river (679 m), which extends from the entrance to the park around the 4200 m long educational trail. Other sights include the Viljska sinkhole (200 m deep), meadows Lazac (1064 m) and Šegina (966 m), and dense forest Smrekovac. The northern part of the National Park is dedicated to the valley of Kupa, a striking hydrological phenomenon and a natural monument. Unusual, blue-greenish color in a deep ravine (84 m) below the Gavranova stijena (Raven’s Rock) and the Kupeško mountain top (715 m) provides a unique experience of beauty and peace. The valleys of Sušice river and Krašićevica stream are interesting geomorphological and hydrological phenomena. The upper course of the Kupa river all the way to the mouth of Čabranke presents an area of first-class natural values â€‹â€‹and is also known as the Valley of the Butterflies, with 74 species of butterflies found there.

The cuisine of Lika and Gorski Kotar is spiced and aromatic, full of strong smells and tastes. Traditional dishes include grilled lamb, mushrooms, frog legs and game specialities such as cured deer or wild boar. The most common desserts are delicious apple or cheese strudels, but you can also try strawberry, blackberry and raspberry strudels in Gorski kotar, where all those berries are used to prepare sweet liquors.