Rovinj is one of the most photographed cities in Croatia. Boasting a rich natural and cultural heritage with beautiful landmarks such as the Old Town, the Golden Cape Park Forest, protected islands and coastal area, Rovinj has many loyal visitors from all parts of the globe and has developed into a popular tourist destination. 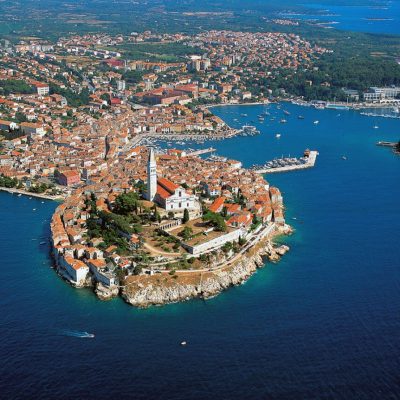 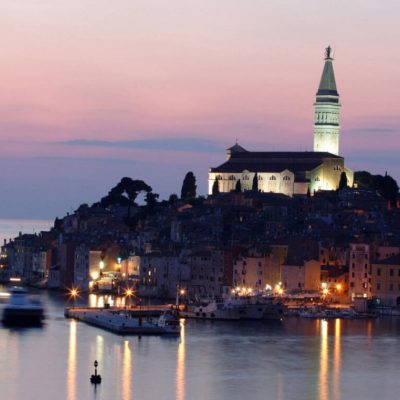 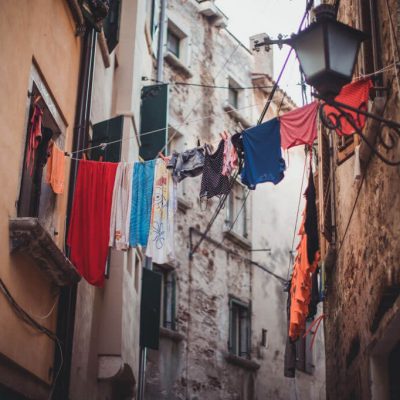 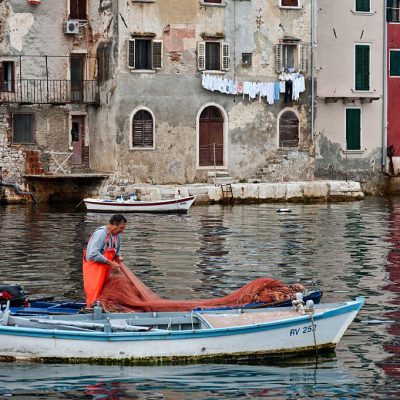 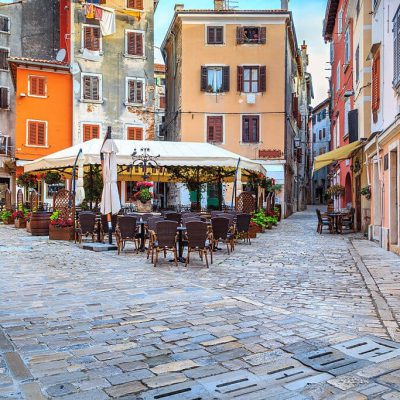 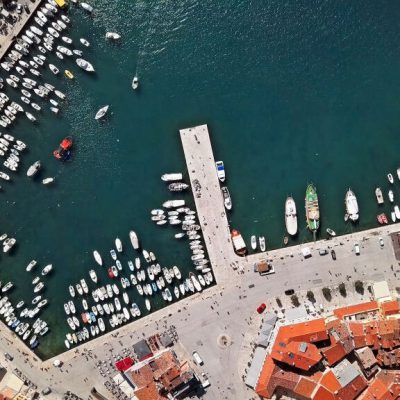 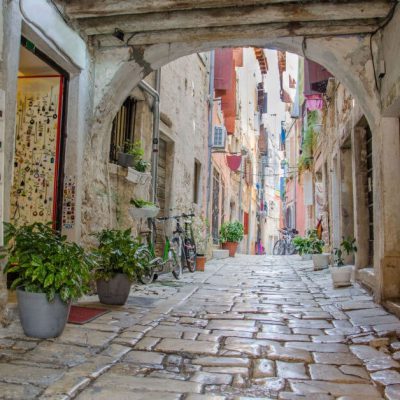 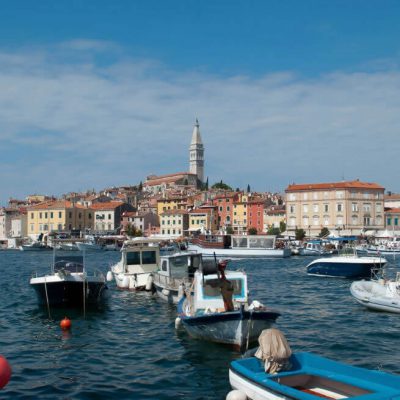 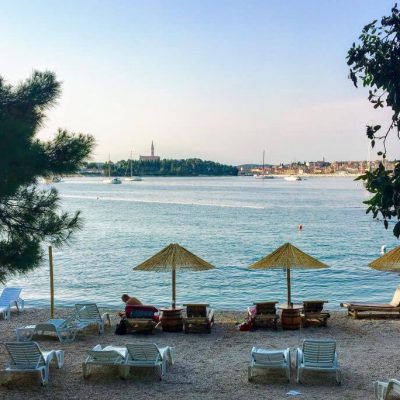 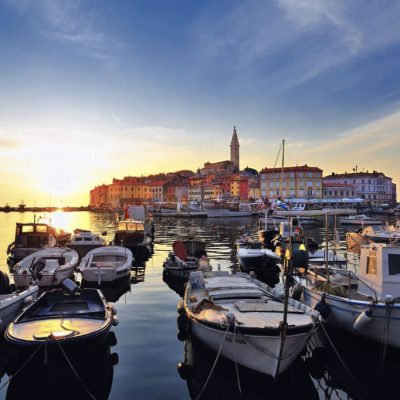 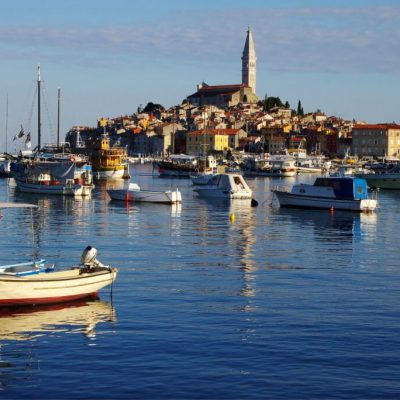 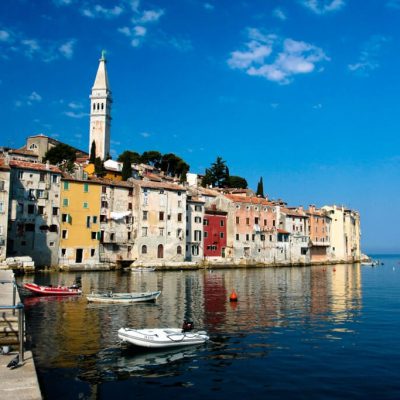 Rovinj is one of the most photographed cities in Croatia. Boasting a rich natural and cultural heritage with beautiful landmarks such as the Old Town, the Golden Cape Park Forest, protected islands and coastal area, Rovinj has many loyal visitors from all parts of the globe and has developed into a popular tourist destination.

Central Rovinj was once an islet, and it wasn’t until the 18th century that the channel separating it from the mainland was filled in. Today, Rovinj’s Old Town is a protected monument and one of Istria’s most visited sites. Rovinj has preserved the best of its architectural and cultural legacy by allowing development but keeping industry on the mainland, where the Rovinj tobacco factory and cannery still play major roles in the town’s economy.

Central Rovinj is a tangle of steep pedestrian streets that are paved with sea-salt-polished cobblestones and marked with signs in Italian and Croatian. These narrow, winding streets are lined with galleries, quaint shops, and excellent restaurants. Most lead to the town’s highest point, where St. Euphemia Church and its campanile dominate the skyline. Add to that Rovinj’s strong Italian personality, which includes a thriving fleet of small fishing boats, a smattering of Venetian-style piazzas, numerous restaurants, cafes, and atmospheric rock walls set next to pounding waves, and you have a town that’s both vibrant and historical.

The average yearly temperature in Rovinj is 13.5°C, with 766.8 mm of rainfall. The climate is warm and semi-dry, with more than four months a year without wind. The total of 134 sunny days in a year make Rovinj the third sunniest spot in the Adriatic. At the same time, it is the least cloudy place.

The Rovinj Tourist Information Office is located just off the main square at the harbor. It has brochures, maps, and information on accommodation and the town.

The main post office can be found at M. Benussi bb.

Rovinj is situated on the western coast of Istria, the largest peninsula on the Adriatic coastline, a 1 h drive from Trieste, 2.5 hours from Zagreb and 6 hours from Munich.

Rovinj is just half an hour or 16km (25 miles) north of Pula and linked by well-marked roads if you are traveling by car. There is frequent bus service to and from Pula; service to and from Croatian cities that range from Osijek to Dubrovnik; and international service to select cities in Italy, Germany, and Slovenia.

Rovinj is an explorer’s paradise, with a labyrinth of streets and cubbyholes to wander. Most of the important sites are in the Old Town, but there are a few places of note outside the center.

Zlatni Rt – Punta Corrente Nature Park  is a fine reason to venture out. It’s a densely forested park between the Hotel Park and the Hotel Monte Mulini that is rimmed with rocky beaches and full of hiking paths.

Limska Draga Fjord (the Lim bay) is a flooded karstic canyon less than 16km (10 miles) north of Rovinj. It looks like a ribbon of clear blue-green water framed with forested walls on two sides. At least two caves with evidence of prehistoric habitation have been discovered there, and several local legends say that pirates used the inlet as a base for ambushing merchant ships. Mussels and oysters are farmed there and you can sample them at any of the restaurants along the road that skirts the area. Excursions to Limska Draga leave from Rovinj and Poreč daily and often can be booked directly at seaside or from any travel agency in town.

You can enter Old Town from the main square through the 17th-century Balbi Arch, which leads up to Grisia, Rovinj’s most interesting street. The arch is on the site where one of the town’s seven gates once stood; it is carved with a Turk’s head on one side and a Venetian’s head on the other.

Rovinj’s main street is really a steep, cobbled passageway that runs from the main square all the way up to St. Euphemia Church. It is lined with shops and galleries and buildings that still sport vestiges of the town’s medieval roots. August is officially the month of Grisia’s art celebration; during this month, shops and restaurants remain open as long as there are people in the streets.

Fishing is the focus but multimedia is the catch at this new museum dedicated to the industry that made Rovinj famous. The museum’s name refers to the batana, wooden fishing boats that still are in use and often moored in Rovinj’s harbor. This is no collection of weathered wood and rusty anchors: Instead it is an interactive exhibition that uses film and sound to provide a virtual immersion into Rovinj’s culture.

The Baroque church dedicated to Rovinj’s copatron saint is the third iteration of the shrine built in her honor. When the saint and her sarcophagus appeared in Rovinj early in the 9th century, they were housed in a chapel near the Church of St. George. A century and a half later, a larger church dedicated to both saints was built to accommodate pilgrims who steadily streamed into Rovinj to pray to Euphemia. Finally, the present church was built on the same site atop Rovinj’s highest hill in the early 18th century.

A pleasant climate and a wide array of sports facilities make Rovinj an ideal venue for competitions, tournaments, sports schools and training camps for professional athletes all year round.

The guests can participate in plenty of summer events such as: Rovinj Photodays, Summer Salsa Festival, Kultfest, Lugger Regatta; as well as traditional festivities such as: Rovinjs Night and the Feast of St. Euphemia, the patron saint of Rovinj.

Istria – an enchanting Mediterranean peninsula surrounded by the clear blue sea – offers numerous cultural, historical and natural sights and unforgettable views from hilly villages, and hides a wealth of tradition and taste.

Istrian cuisine is a true reflection of historical and geographical characteristics of the peninsula and the result of a mixture of different traditions with dishes based on wild plants, aromatic herbs, seasonal vegetables, seafood and olive oil.

An invitation to explore and taste values of this blue and green refuge lies in the smile of the Istrian host, in the products of his hard-working hands, in the nature which seduces with its beauty and in the lively past that emerges from the rocks and lumps of earth. Once you’re here, horizons are expanding, senses are deepening, tension is gone, harmony is restored, and new experiences and friendships become permanent.

Istrian people have always been devoted to the wine grape cult; wine is a sacred thing here, the necessity and love, the art of living. The most famous wine is Istrian malmsey, with a refined aroma and fresh taste that complements the dishes made from seafood.

Black wines teran and refošk are old and autochthonous Istrian wines. With their dark ruby colour, lively fruit aromas and intense taste they perfectly blend with meat dishes. Many connoisseurs of Istrian wines point out Muscat wine because of its golden colour, scent of wild carnations and extraordinary aroma.

The IQ (Istrian Quality) designation on Malvasia wine is intended for identifying high-quality products made from Istrian Malvasia grapes.