This bustling city of 65,000 at the southern tip of Istria is a working port as well as a repository of some of the best Roman ruins in Europe, including a well-preserved amphitheater from the 1st century that is Pula’s biggest draw. Pula has other vestiges of Roman occupation (Temple of Augustus, Forum, Arch of the Sergi) that are worth seeing, too. 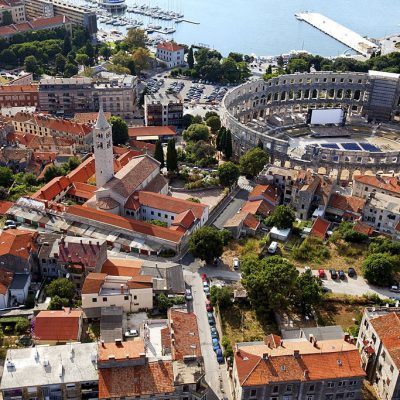 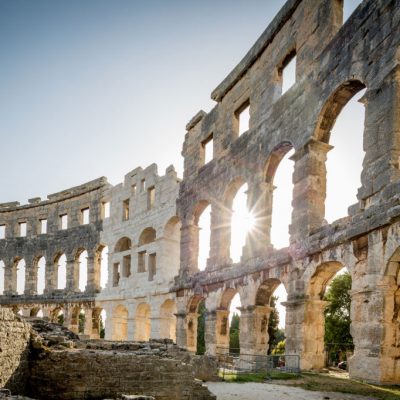 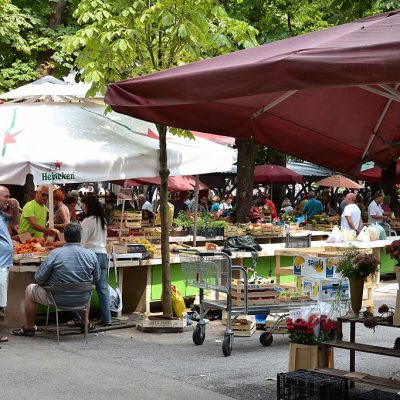 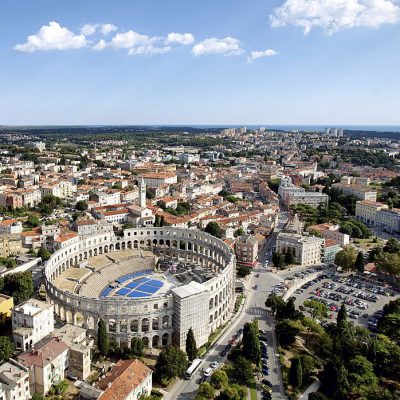 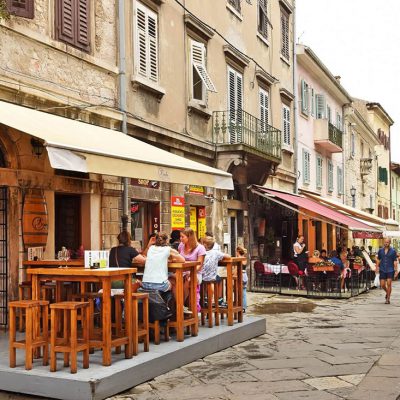 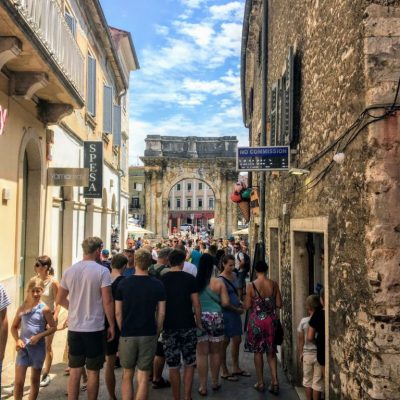 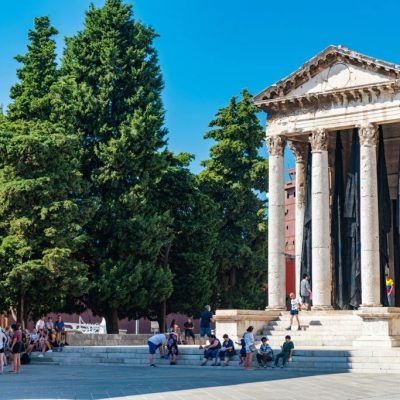 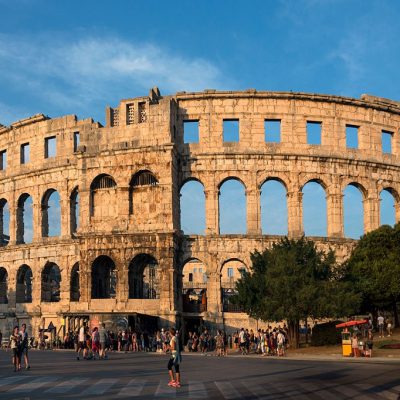 This bustling city of 65,000 at the southern tip of Istria is a working port as well as a repository of some of the best Roman ruins in Europe, including a well-preserved amphitheater from the 1st century that is Pula’s biggest draw. Pula has other vestiges of Roman occupation (Temple of Augustus, Forum, Arch of the Sergi) that are worth seeing, too. Besides its cache of Roman artifacts, the city is home to a graceful Gothic Franciscan monastery erected by the monks when they arrived at the end of the 13th century, as well as a 17th-century fortress that now houses Istria’s history museum. It was built by the Venetians.

Historical attractions aside, Pula is a busy commercial city on the sea that has managed to retain a friendly small-town appeal. Just a short bus ride away, a series of beaches awaits at the resorts that occupy the Verudela Peninsula to the south. The coast is dotted with fragrant pine groves, seaside cafes and a clutch of fantastic restaurants. Further south along the indented shoreline, the Premantura Peninsula hides a spectacular nature park, the protected cape of Kamenjak.

The Tourist Information Office is off Forum Square at Forum 2, opposite the Temple of Augustus. It provides maps, brochures, and lists of events in Pula and around Istria.

Left-luggage at the main bus station.

The main post office is at Dante’s Square (Danteov trg). You can make long-distance calls here.

You can exchange money in banks, travel agencies or at the post office.

Pula is a very walkable city even outside its center, and its bus system can get you almost anywhere you need to go in town. Beyond that, a large number of bus routes run from Pula to Zagreb to Rijeka, and from the Istrian cities of Rovinj, Vrsar, and Poreč plus the gateway city of Trieste in Italy and coastal towns in Slovenia. If you want to explore the hills and valleys of the Istrian interior, you’ll need a car.

Pula Airport is located 6 km northeast of town. There are daily flights to Zagreb, and in summer, there are low-cost and charter flights from major European cities. An airport bus departs from the bus station.

For almost a year (Oct 1904–Mar 1905), Irish author James Joyce lived in Pula, where he taught English to Austro-Hungarian naval officers through the Berlitz School. Today, Joyce is immortalized in bronze in the coffee bar Uliks (Ulysses) just steps from the building where he taught. Passers-by often do a double-take when they pass the statue of the author, who is portrayed seated at a table.

Built on a square that once was the city’s Forum, the Temple of Augustus is dedicated to Octavianus Augustus, the first Roman emperor. The temple was converted to a church after Christianity became the religion of choice in Croatia. It also was used for grain storage, but after being severely damaged during World War II, it was rebuilt. A small museum inside displays artifacts found near Pula; all are captioned in English, Italian, and Croatian.

Triumphal Arch of the Sergii

The Sergi Arch opens to Portarata Square and stands in the middle of a busy shopping area. The privately financed arch was built at the end of the 1st century by Salvia Postuma Sergi to honor three male family members who had fought in the Battle of Actium.

Walk through the Sergi Arch and bear left until you get to Carrarina, where you will encounter Pula’s oldest gate dating from the 1st century. It is decorated with a relief of its namesake mythical hero.

Though smaller than the Coliseum in Rome, the Arena, as it is known by locals, is remarkable because its outer wall is almost entirely intact. Inside, vestiges of the Arena’s fittings still are visible, though its stone seats were removed in medieval times to complete other building projects. The facility was designed to host gladiatorial contests and 20,000 people. It used a clever system of cloth canopies to shade spectators from the sun and parts of the system still hang from the wall. The chambers under the Arena have been restored and now house a museum. During the summer, the Arena is a concert site attracting such big-name stars as Elton John. It is also the site of the prestigious Croatian Film Festival (in July).

Cathedral of the Assumption

This cathedral has had many makeovers since it was converted from a Roman temple to a church in the 4th century. The current facade and bell tower date from the 17th century. Inside there are a few 5th- and 6th-century mosaic fragments and the cathedral’s unusual altar, which is actually a Roman sarcophagus that contains the relics of some 70 saints. The amphitheater’s stone seats and other stones were used to build the bell tower.

Archaeological finds from all over Istria are displayed in this museum that once was an Austrian secondary school. The emphasis is on artifacts from Old Histri and Roman times, but there are some nice medieval exhibits, too. Be sure to visit the outdoor sculpture garden casually decorated with scattered pieces of history and note the Roman Twin Gates (above) at the entrance. There is also a Roman Theater in back of the garden. You can access the garden and theater even when the museum is closed.

There are several diving centres around Pula, and you can go biking, kayaking and windsurfing in Premantura. An easy 41 km cycling trail leads from Pula to Medulin, following the path of Roman gladiators. Most travel agencies offer trips to Brijuni, Limski zaljev (the Lim bay), Rovinj and inner Istria.

There is no shortage of decent restaurants in central Pula, but most of the better (upscale) restaurants are in the suburbs south of the center.

Here are some dishes you should try: crab-stuffed ravioli as a main dish and lavender semifreddo with fig sauce for dessert; lobster with Istrian noodles; traditional dishes that feature truffles, including fuži (Istrian pasta) and dishes with an Italian theme like ravioli filled with pršut and skuta, an Istrian curd cheese. Before trying a steak with white truffles make sure to taste the olive-oil aperitif—three glasses filled with Istrian olive oil, olive tapenade, and olive butter, with crusty bread for dipping.

Istrian supa is a specialty that consists of hot wine, usually Teran, which is enriched with olive oil, sugar, salt, pepper and a slice of overdone bread.

The well-known Istrian grappa is one of Istria’s major brands. The most famous among them is certainly the grappa with mistletoe – a brandy with mistletoe leaves and fruits of. The recipe for mistletoe grappa was given to the local people in secret by the Druids, the ancient Celtic priests, and since then has been prepared with love and attention.

Medica or Medenica is a grappa with homemade honey, sweet and supple. Medenica is drunk cold and is usually a welcome drink in Istria. Also known are grappas with rues, cherries, figs and prunes.