Poreč and the surrounding region are entirely devoted to summer tourism. “Something for everyone” could be Poreč’s motto—the seaside resort offers a wide variety of attractions, from a UNESCO World Heritage basilica complex to endless shopping opportunities to slick resort hotels crammed with activities and services. 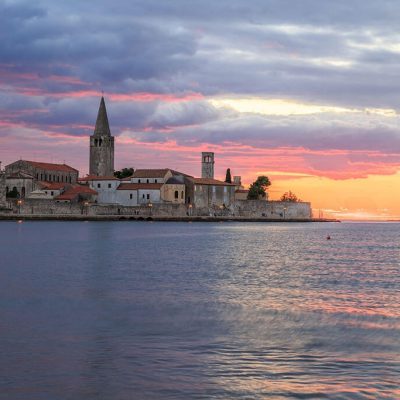 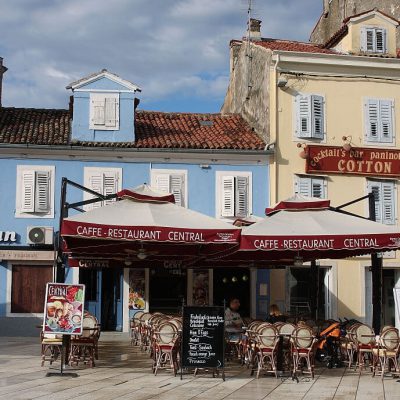 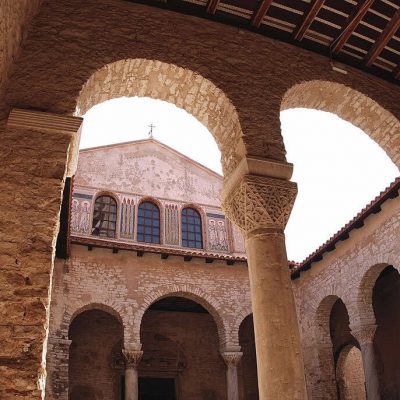 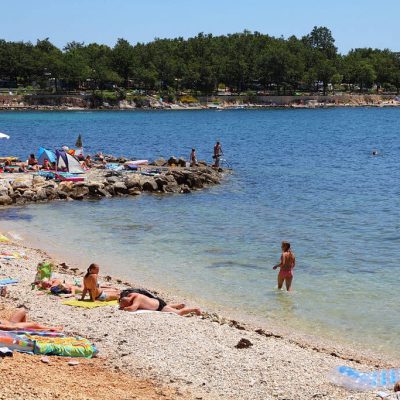 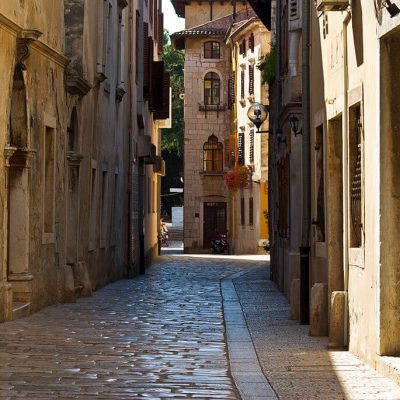 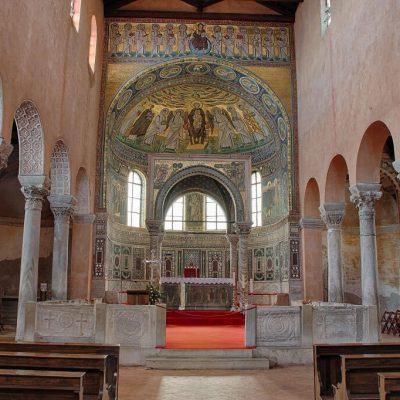 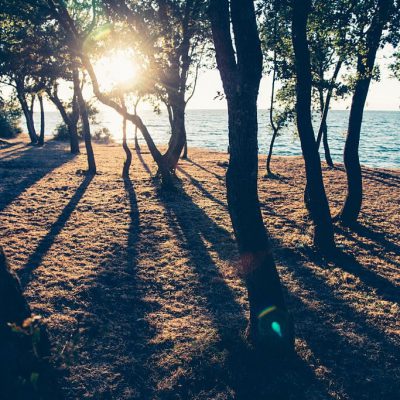 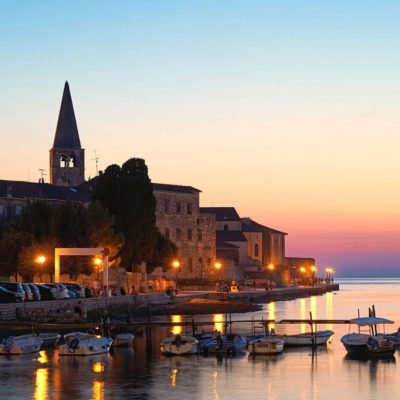 Poreč and the surrounding region are entirely devoted to summer tourism. “Something for everyone” could be Poreč’s motto—the seaside resort offers a wide variety of attractions, from a UNESCO World Heritage basilica complex to endless shopping opportunities to slick resort hotels crammed with activities and services. Old Town is the epicenter of this mecca, with immaculate cobblestone streets, precisely clipped plantings, multilingual signs explaining all points of interest, and enough jewelry stores and gelaterias for every tourist in Croatia.

The coast of Poreč measures 37 km, islands included, but the ancient town is confined to a peninsula 400 m long and 200 m wide. The Romans conquered the region in the 2nd century BC and made Poreč an important administrative center from which they were able to control a sweep of land from the Limska Draga Fjord to the Mirna River. Poreč’s street plan was laid out by the Romans, who divided the town into rectangular parcels marked by the longitudinal Decumanus and the latitudinal Cardo.

Hotels, travel agencies and excursion boats are on the quayside Obala Maršala Tita, which runs from the small boat harbour to the tip of the peninsula. The bus station is just outside the old town.

The Poreč Tourist Information Office can provide maps and brochures as well as leads on available accommodation and events. It can be found at Zagrebačka 11.

* Dogs are allowed in the cove located near the Laguna Materada hotel or in the area of Stari Červar. Dogs are not allowed at the Blue Flag beaches.

* Mild and comfortable winters are truly short in comparison to the hot and dry summers with an average of 2400 hours of sunshine per year.

* The water of the sea around Poreč is preserved and clean, and the swimming season lasts from May to October with the hottest months being July and August when the gentle maestral, a sea breeze that blows from the sea towards the land, will bring you refreshment on the shore.

The main post office is at Trg slobode 14 and has a telephone centre.

Foreign currencies can be exchanged in banks, exchange offices, post offices and in most tourist agencies, hotels and camps. Credit cards (Eurocard/Mastercard, Visa, American Express and Diners) are accepted at virtually all hotels, marinas, restaurants and shops as well as at bank machines.

There are daily buses from the bus station to Rovinj, Zagreb, Rijeka and Pula. Between Poreč and Rovinj the bus runs along the Limska Draga Fjord. To see it clearly, sit on the right-hand side if you’re southbound, or the left if you’re northbound. Frequent buses to Vrsar stop at Plava Laguna, Zelena Laguna and other resorts south of the city.

The nearest train station is at Pazin, 37 km away.

There are daily catamaran lines to Venice and Trieste.

Excursions to this collection of limestone caverns are among the most popular day trips out of Poreč.  Just 7km (41⁄2 miles) northeast of town, the caves are breathtaking chambers filled with stalactites and stalagmites. Entry fees cover the services of a guide, who takes you on a 40-minute tour of the underground halls and galleries and talks about the caves’ flora, fauna, and minerals. Baredine’s guides unfailingly relate the story of the legendary ill-fated lovers who died while looking for each other in the caves.

UNESCO has put this collection of early Christian and early Byzantine architecture on its World Heritage List, and you should put them on your “must-see” agenda, too. Situated near the town center, the basilica is the last of four churches that were built between the 4th and 6th centuries, one on top of the other on this site. Evidence of those earlier churches is still visible, but the current complex originally built by Bishop Euphrasius in the 6th century is the focus. Besides the basilica itself, the complex is home to an atrium, a baptistery, a bell tower, and a bishop’s palace. Visitors to the complex enter through the arches of the atrium. The bell tower was built in the 16th century, and the rest of the structures have undergone several renovations. Even if you aren’t into visiting churches, make an effort to see the complex’s spectacular gem-studded mosaics  as well as its symbolic early Christian fish mosaic.

Poreč’s better beaches are off this close-in island, which is a short boat ride away from the harbor.

The remains of Poreč’s Roman Forum and two Roman temples (Mars and Neptune) are the highlight of Trg Marafor (Marafor Square), which is on the tip of the peninsula. Today, Trg Marafor is the site of several sleek cocktail bars and jazz clubs such as Lapidarium.

There are three 15th-century towers from the Venetian rule that once formed the city walls: the gothic Pentagonal Tower at the beginning of Decumanus Street, the Round Tower on Narodni trg and the Northern Tower in the Peškera bay.

Poreč and its surroundings have strong links to active holidays, sport and recreation tailored to all ages. Poreč’s climate is favourable for outdoor sporting activities almost all year round whilst in hotels you have fitness rooms, wellness, saunas, gyms and in-door swimming-pools at your disposal.

Poreč is also proud of some grassy football pitches, four sport halls as well as bowling and squash halls. There are outdoor table tennis tables, airgun shooting, archery, darts, snooker, chess and skittles. Here you can also rent bikes and scooters to set out on new adventures.

Sea lovers will surely not be bored in Poreč, especially if they are entrepreneurially-spirited.  The beauty of the Adriatic Sea and underwater environment can be explored year-round.  Alongside the flora and fauna of the sea hidden amongst the underwater reefs and caves, you can also tour the silent world of shipwrecks.

Poreč is also registered on sailing maps.  It is host to many regattas, and in sailing school you too can begin a new adventure with the wind at your back.

Istrian cuisine, prepared according to traditional recipes for centuries, is based on the fruits of the soil and of the sea. In the area around Poreč all dishes are prepared with the addition of valuable wild plants, wine vinegar and olive oil.

Every household in Istria has since ancient times prepared maneštra, a thick boiled soup made of various vegetables with the addition of cured meat. Traditional pasta such as fuži, njoki, pljukanci or pasutice, are served with a gravy-like sauce made of chicken, beef or wild game known as žgvacet. Traditionally cured ham or Istrian pršut was once served only at special occasions, while fritaje, egg omelettes with wild radicchio or asparagus were eaten all year.

First-class meat specialties other than pršut are ombolo (boneless pork loin) and kobasice (sausages) which can be eaten raw or grilled. Poreč’s restaurants and taverns prepare potatoes pod čripnjom (baked on a hearth by covering with a bell-shaped metal lid and then covering the lid with embers) and serve them as a side dish to meat specialties. Other than these, you can also taste seafood specialties.

Depending on the season, on hot summer days Poreč’s restaurants offer fresh and delicious European seabass, gilthead seabream, grooper, sardines and numerous shellfish. It is important to note that flat oysters are eaten raw, while Mediterranean mussels are eaten steam-cooked in their own juices with herbs and wine.

The Poreč area’s most plentiful wine, Istrian Malvazija (Malmsey), a variety of white wine, and immediately alongside it White Pinot, Grey Pinot, Chardonnay and Sauvignon proudly climb the surrounding green hills.  Of red wines, those that best grow in the area are Teran, Borgonja, Merlot and Cabernet Sauvignon.  Muškat and Malvazija Slatka (sweet Malmsey) are excellent desert wines.

The wine roads will enchant you with their natural beauty and all the colours, scents and tastes will guide you to new explorations.