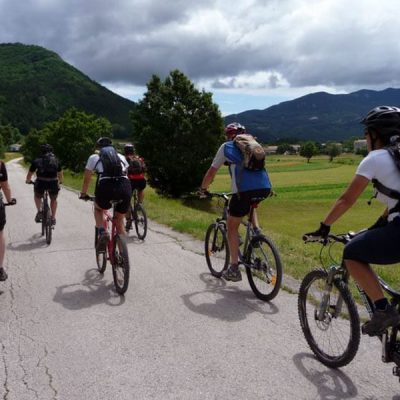 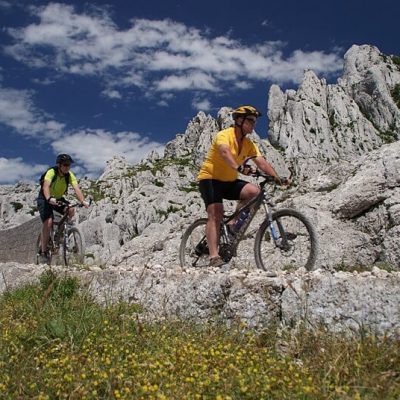 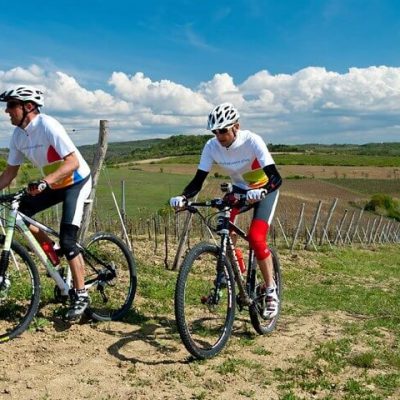 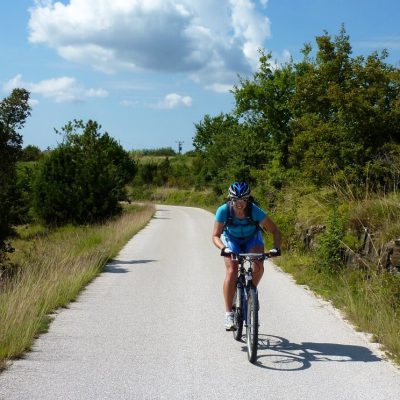 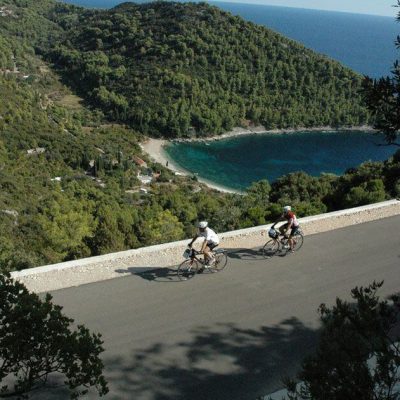 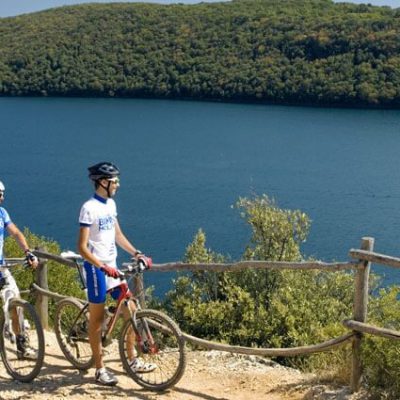 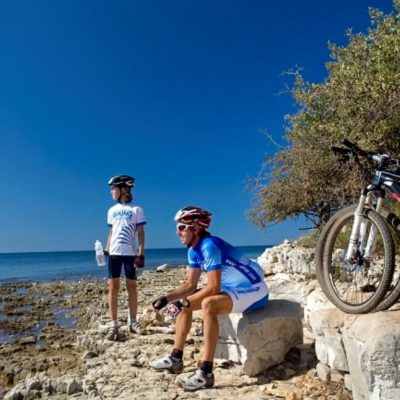 This Cycling Croatian National Parks tour will take you to Croatia’s inland mountain region. The five national parks you will visit are: Risnjak, North Velebit, Plitvice Lakes, Paklenica and Krka River. While the daily routes on this cycling tour are between two and five hours. The terrain is easy to moderate. Therefore leaves enough time for relaxing in the evening. We chose the accommodation carefully to reflect the local feel close to the key destinations. The foodies will enjoy variations of continental specialties and sea food delicacies.

Therefore this tour is all about exploring the lovely pastoral Croatian countryside by bicycle. We cycle on roads that are nearly traffic free, Through forests, between hills and across green fields. The tour takes us through traditional villages and most beautiful and stunning national parks of Croatia. Our skillful and knowledgeable guides will share their insights on flora and fauna diversities as they change throughout the regions. You will have a chance to taste some forest strawberries or blackberries, raspberries or cherries, or roasted corn and chestnuts. Depending on the season of your trip. 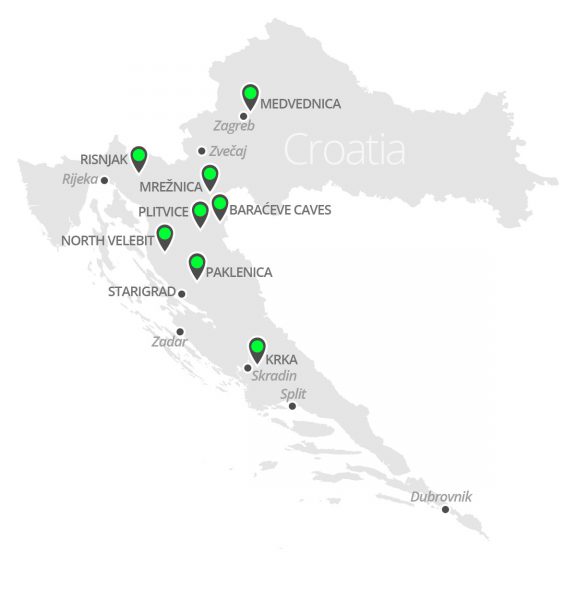 Zvecaj is a small village by the Mreznica River, not far from the highway connecting the Croatian capital city of Zagreb with the harbor of Rijeka. We will meet you at the airport, railway station or in the harbor and take you there unless you are driving yourself.

‘The Green Corner’ (Zeleni kut) is a well-known restaurant and a small family-owned hotel overlooking the green Mreznica River and its waterfall. Each room has its own bathroom, most of them a sunny balcony as well. It was built above an old mill which now supplies electric power. The hotel serves traditional Croatian specialties using freshwater fish from its own fishing ponds, homemade cheese, ham, and sausages as well as local farm grow vegetables and fruit.

The group usually gets together around mid-day, which will give us enough time to choose and test the bicycles on a short tour of the villages, forests and rivers of the area.

On our first day of biking, we’ll start exploring Risnjak National Park. The pristine park covers an area of 63,5 km2 including the Risnjak and Snjeznik ranges. The Kupa River forms a natural border between Croatia and Slovenia. The Kupa River flows through a picturesque valley, also known as the mysterious valley of butterflies – more than 500 species of butterflies inhabit the area! We’ll start the tour from the entrance of the national park and bike towards Razloge. The route leads through little villages and forest paths where the fresh clean air will renew your senses. The bridge crossing the Cabranka River by Zamost is also a border crossing to Slovenia. After a short passport procedure, we will bike along the Slovenian bank of the green Kupa river to Brod, where we will cross back to Croatia. Here we will have time to relax and freshen up with a swim or a cold drink before returning back to our hotel for dinner.

After breakfast, we’ll load our bikes and luggage and drive to Croatia’s youngest national park – Northern Velebit National Park, 800 meters above sea level. After a short walk in Krasno village and the park area, we will descend by bikes to the Valley of Gacka River, world famous for excellent trout fishing. A stop for lunch will be made by its source, surrounded by numerous old wooden mills. From here, we drive towards the UNESCO World Heritage Site – Plitvice Lakes National Park.

Accommodation in the park is provided by the families of Korana Village, a small romantic place hidden away in a valley by the Korana River. The houses are small, traditional dwellings with simple rooms in an idyllic setting. The peaceful atmosphere makes the village an ideal base from which to explore the surrounding area – Korana Village has no pubs, restaurants, shops, schools, not even a church – it’s just a village as small and wonderful as it can be, an ideal setting for a fairy tale.

You will visit the most beautiful and stunning national park of Croatia – Plitvice Lakes National Park – possible only by walking or hiking around its 16 lakes, numerous waterfalls fed by both the Black and White Rivers, and seemingly endless forests.

We start our day walking along the wooden paths and bridges in and around Plitvice Lakes, Croatia’s premier national park. Its exquisite series of 16 emerald green and opal blue travertine lakes, more than 90 waterfalls and numerous caves make it a UNESCO World Heritage Site. The lakes are surrounded by beech and pine forests and are home to extensive wildlife. We’ll enjoy a picnic lunch in the pure, untouched nature. A panoramic boat and train ride will take us back to the start.

For those who chose a 5-day trip, this is the end of your holiday. The rest of the group continues the trip. Today is all about exploring the lovely pastoral Croatian countryside by bicycle. We cycle on roads that are nearly traffic free, through forests, between hills, and across green fields. Cycling through traditional villages, we reach Barac Caves where we stop for a guided underground tour of the cave’s fascinating limestone formations. According to local legend, a man named Barac fought heroically and defeated a raging Turkish giant near these caves, which were thereafter named in his honor. After visiting the caves there will be time for an optional visit and walk in the national park (small lakes and waterfalls) before going back to Korana Village in time to enjoy traditional Croatian dinner.

After saying goodbye to our village hosts, we continue south to Paklenica National Park, part of a UNESCO World Biosphere Reserve and a favorite hiking and climbing destination. Lying on the southeast slopes of the Velebit Mountains near the coast and cut by two awe-inspiring gorges, Mala Paklenica and Velika Paklenica’s scenery is one of the most pristine in the whole Mediterranean. The lofty peaks making up this range offer huge views of both coastal and mountain scenery. There are several wonderful hikes through beech and black pine forests to choose from. The most popular is the trail leading to Borisov Dom, a mountain hut popular among mountaineers. After descending all the way to the sea we drive to Skradin for the evening.

The last day of the journey takes us to Krka River National Park with its fantastic karst formations and travertine waterfalls. We explore the park’s extensive waterways and complex history dating back to the late 10th century and first Croatian kings. One of the options is a visit to Skradinski Buk waterfall, the place where the second hydroelectric power plant in the world was built, just a few days after the one on Niagara Falls. We will bike to the shores of Lake Visovac where we will have a view over the island and its monastery. After cycling, we return to the hotel and enjoy a late afternoon in the old town before the final evening dinner and a celebration of an amazing adventure.

Accommodation: 3* Skradinski Buk Hotel in Skradin; Cycling: easy/moderate, 3 hours/ 30-40 km; Meals: B and D (picnic lunch on your own)

Depart from Skradin to the airport and flight home. You are welcome to schedule your homeward transport for any time. If you decide to spend more time in Croatia, our guides will be happy to recommend other beautiful places to visit – especially those you won’t find in tourist guidebooks.

The prices are set in euros. The exact price in other currencies is calculated on the day of booking according to the exchange rate of the Croatian National Bank.
All prices are per person.

If the Client should cancel or abort the travel, all Client’s cancellations must be in writing – by e-mail or fax. The written cancellation date shall be the basis for the compensation of cancellation costs which shall be collected by the Agency as per conditions set forth below (percentage of total arrangement price):

Min 4 – max 16 people per group; larger groups are on request. Minimum numbers apply. There is a possibility of cancellation after confirmation if there is not enough passengers to meet requirements. In the event of this occurring, you will be offered an alternative or full refund. In case the minimum number of participants is not met but the guest/s still want to do the trip, the price increases by a percentage depending on the final number of participants.

Accommodation is provided in the following units: in the Zeleni Kut hotel on the bank of the Mreznica River (days 1 & 2) by the families of Korana Village, a small romantic place hidden away in a valley surrounding both sides of the river in Plitvice Lakes National Park (days 3, 4 & 5) and in Skradinski Buk hotel in Skradin (days 6, 7 & 8).

Please check with us before purchasing your airline tickets to ensure your trip has the necessary minimum number of participants required to operate. Early arrivals / Extended stay notes – we include two transfers with each trip. These are usually the transfers on the first and the last day of the trip. In case you are arriving a few days earlier or extending your stay in Croatia after your trip with us, we can provide additional airport transfers.

Meals tend to be fairly heavy on the meats and sausages, breads and pastries, pastas and dumplings. If you have special dietary needs, please let us know as soon as possible. Vegetarian diets can be accommodated but we recommend that you bring along with you some of your favorite protein snacks.